This year we have a great community bar at the BarCamp venue so so have decided to open it up to all in the evening. If you want to join us for a drink or two, or three, or four then come along in the evening. Following the ethos of and supported by The Geekest
Read More

Did I mention that one of the benefits of being in a cinema is that we have a very large screen and flashy digital projector allowing us to show from a DVD or laptop? In the evening we will probably throw up a few films from sing-alongs to documentaries. If you have something you would
Read More

Good news. We have just released the tickets for BarCampNorthEast4 at http://barcampnortheast4.eventbrite.com/ .
Read More

Good news. Tonight we have had confirmation that we can hold BarCampNorthEast4 on the 13th and 14th of August at the Star and Shadow Cinema, Newcastle. More details to come soon.
Read More

We are provisionally looking in to hold BarCampNorthEast4 on either the 13th/14th or the 20th/21st or August at the Star and Shadow Cinema. This is is a different part of the same building the original BarCampNorthEast was held in in 2008. Lots of people have offered help in the past so if you can help please
Read More

BarCampNorthEast3 is now over and we have just about recovered. A big thank you for coming and making the event the success that it was, and a special thank you to our hosts and sponsors. We could not have done this without the support of the Yahoo! developer network, the Centre for Life, Newcastle science festival, Microsoft and Super
Read More 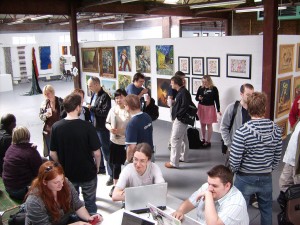 A BarCamp is an ad-hoc gathering of people to share and learn in an open environment.

The most recent BarCampNortEast5 was held in the centre of Newcastle upon Tyne on the 21st and 22nd July 2018.